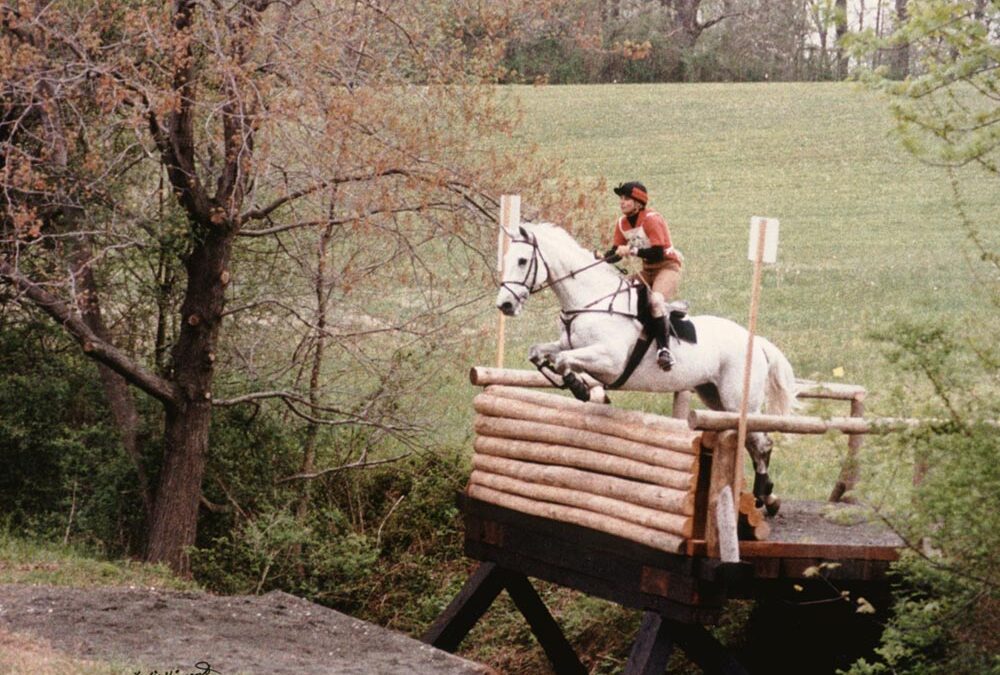 I get asked for my thoughts on this topic quite often. Honestly, I think courses before my day (early to mid1980’s) were more dangerous as far as the types of questions asked, flimsy construction of fences, and the terrain where they were built. It was expected, however, that the horses would be prepared to jump under those conditions. Thankfully, things were much improved by the time The Gray Goose and I began our career, but even so, we were still expected to embark on Cross Country even if it was thunder storming—with all that metal on the horse creating the potential for disaster to literally fall from the sky. The original sport came from military traditions and tested a horse’s abilities on the parade ground (dressage), carrying a message across the country (and hunting in Ireland, I found out just what that meant! You could be jumping anything from stone walls to holes in the ground, to cattle on the other side of a long drop over a fence), and show jumping proved that your horse was fit to continue after the Cross Country run. If you go back and read the books written by military folks from the 1930’s and 40’s, horses WORKED. They would go all day every day. They were light horses–Thoroughbreds and Thoroughbreds crossed on sturdy, hardy stock. People were the same physique. I think my time of competing was one of the best. Course design was safer, and we still had the Thoroughbreds and Thoroughbred crosses (The Gray was 7/8th Thoroughbred, 1/8th Irish Draught). We were also still connected enough to the old days of really using horses and what it entailed to truly condition them. There were deaths then, too, of both horses and riders, but significantly fewer than today. I see several things in today’s world: There are a whole lot more Warmbloods on course, who are heavier and harder to condition. The purpose of the Cross Country is shifting from a functional military application to more of a Handy Hunter/speed Show Jumping course over solid fences. In addition, horses no longer either practice or compete in dressage and show jumping on grass courses…working instead on perfect footing blends. As my barefoot trimmer tells me, perfect footing takes a lot of the stress and load off a horse’s soft tissue system and provides bounce to the stride for the horse. The tendons and ligaments, as a result, become weaker and prone to issues when needed to accommodate to the constantly shifting degree of unevenness that natural footing provides. During the time I competed Gray, a lot of folks (including me) had grass or early wood product (which had its own learning curve) arenas. We COMPETED in grass arenas. While it was awful doing dressage in the mud, the horses certainly grew strong and sure footed. And the stress load on their soft tissue system was CONSISTENT with what they were used to in training. Because of the efforts to make Cross Country more of a spectator sport, the fences are now often in groups, which means you run a long distance, gather your horse to jump a bunch of fences that need show jumping precision, and then gallop off again. Forty years ago, we had complexes, too, but they were much fewer, and the bulk of the courses were obstacles you could take galloping in stride—far easier on a horse’s mind and body, and much more natural. The steeplechase and roads and tracks on phases A, B, and C set you up for the cross country, and got the horse’s system ready to do it. Also, there was a big difference between a full Three-Day horse and one that was good at the Horse Trial format (without steeplechase and roads and tracks). Those elite equine athletes were few and far between, and you didn’t really know whether you had one until you did your first Three-Day. I’m not diminishing the difficulty of the modern test at the upper levels at all, but it is NOT the same as a full Three-Day….and more horses have a shot at doing it. I think horse breeding has become based more on looks and flashy movement than stamina, sturdiness, and performance. Many of the really great Event horses were not “lookers”, including The Gray Goose. And then there’s the whole monetary factor. I was present when Jack LeGoff was discussing the future of Eventing, and the subject of prize money came up. He became very solemn, and in his deep serious voice he proclaimed, and it rang through me when he said it, that the day prize money entered this sport, Eventing as we knew it would die. And he was indeed a prophet. We have had fatalities of both horses and riders throughout Eventing history…it is a dangerous sport. But there are far more now than there were then. On a good note, more people are currently pulling up if they feel their horses are not right. That was extremely rare in the past. We now have frangible pins which allow the top rail or rails of certain fences to fall if hit hard, and jumps can be more easily disassembled when necessary. There are also a lot more tools available to ensure better footing Cross Country, but no one can regulate Mother Nature. In addition, I am not sure how many folks purposely condition anymore in bad weather circumstances. I used to condition no matter what was going on outdoors (except for lightening!), including sleet storms and the middle of the day during Virginia heat and humidity. There are so many factors are involved, but I will stop now….. Photo taken at Green Springs Selection Trial 1984. Leslie Vincent, photographer