From the moment I first felt her presence within me, I knew that this new being was deeply twined around my heart and soul strings. She let me know early on about her strong mind and will, for in bed she would only let me lie in one position; if I deviated, she would pound me incessantly till I moved back into it!

Her eagerness to get started in this life manifested as arriving two weeks early on a full moon. In those days, babies were kept in a separate room after birth. Jack and I made our first trip to see her, displayed in her little tray along with the other babies. One of those was a very large boy with a lusty set of lungs he used to announce his displeasure. The noise was amazing. Andy had been sleeping, but she woke up at this raucous display, deliberately turned her head toward him and glared. All the parents noticed it. I got goosebumps, and it was at that moment that I knew that a very old soul inhabited this tiny body.

We moved to Ireland when Andy was only three months old. The Irish are “mad” about babies, and Andy became our ambassador to the town of Ennis in County Clare. We discovered that babysitters didn’t come to your house there, you took your child into town to the sitter’s house. Andy’s sitter proudly took her everywhere, as I discovered when I went into town and was instantly recognized as Andy’s mom and gladly welcomed. 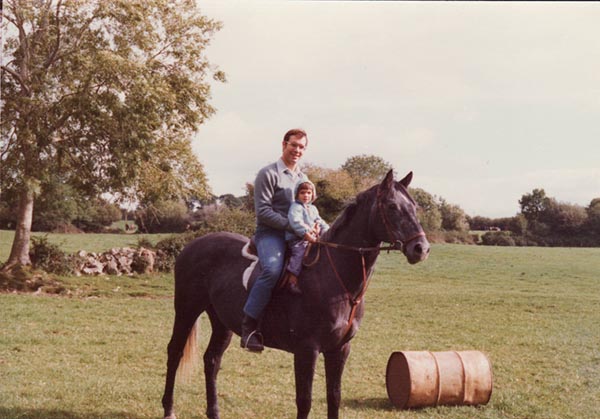 Andy with her Dad, Jack on the Gray Goose. Photo by Kim’s Personal Collection 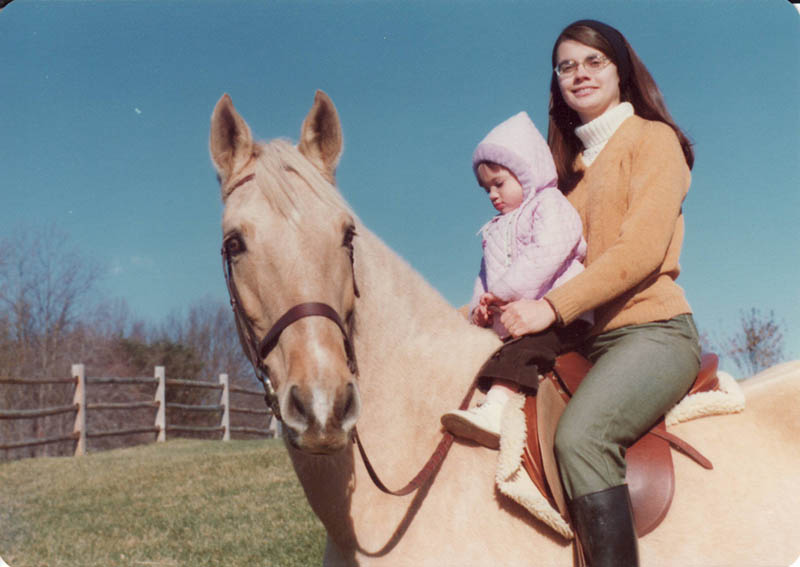 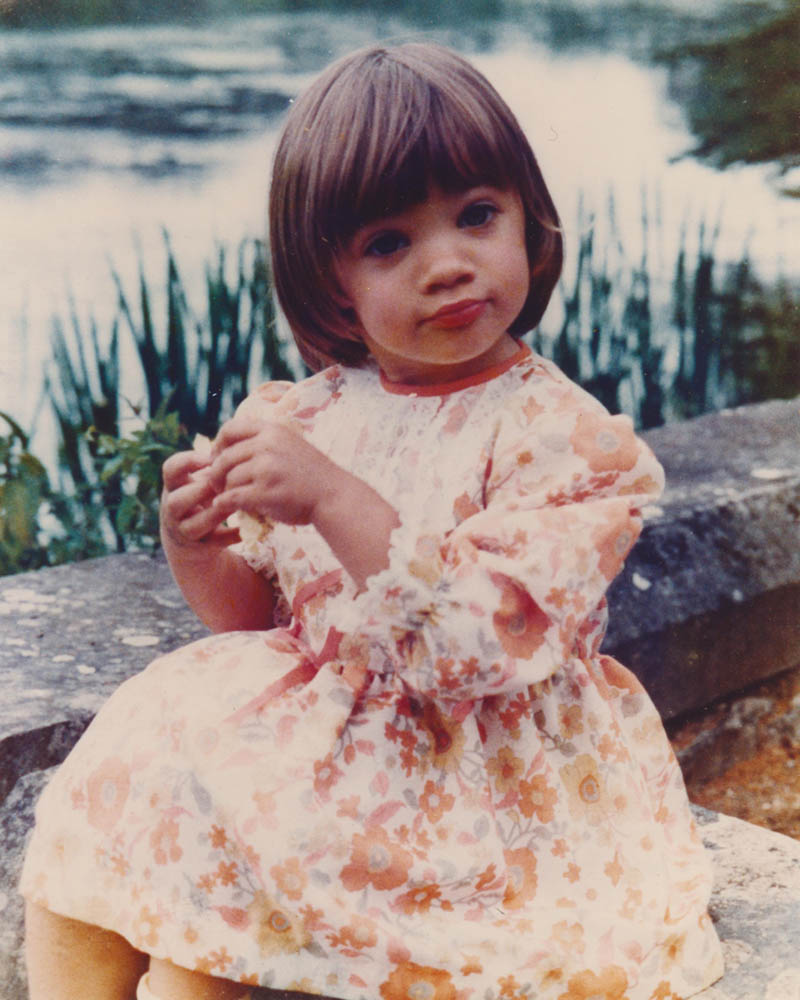 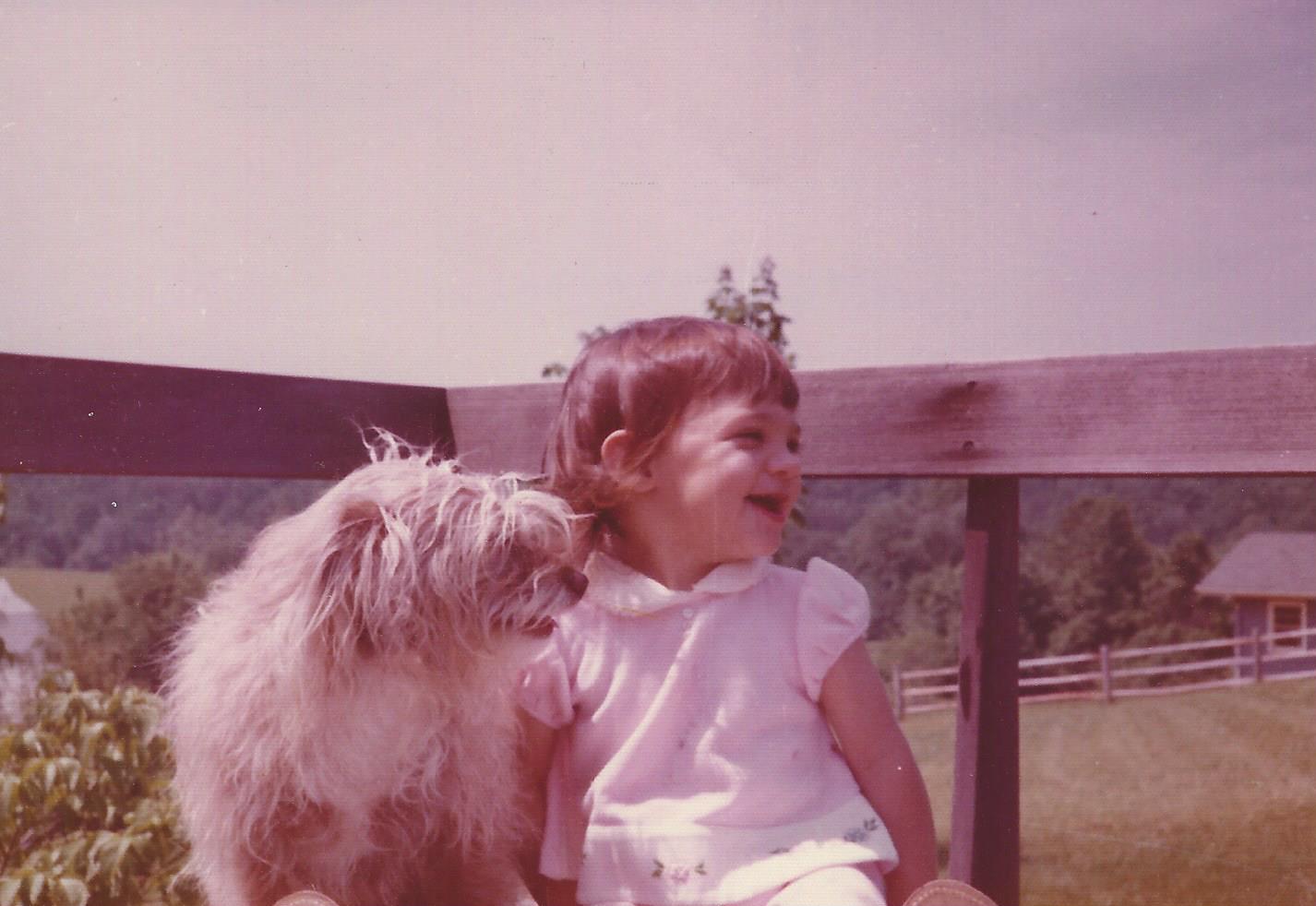 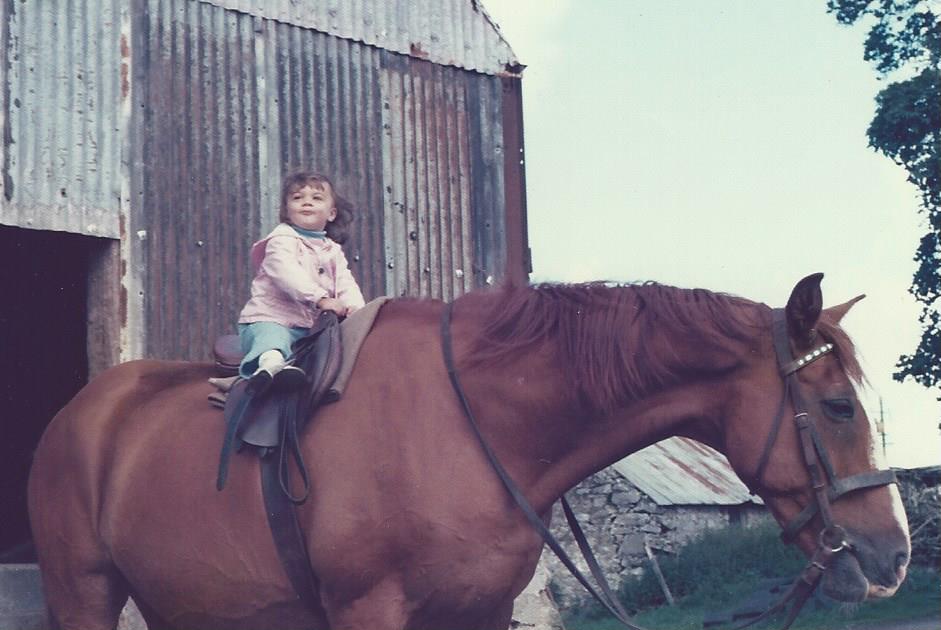 “Every decision you make — every decision that you make every second — is not a decision about what to do, it is a decision about who you are. Every act is an act of self-definition.”
— Neale Donald Walsch
Though she could certainly be cheeky at times, and that indomitable will occasionally caused conflict, Andy was basically a vibrant, cheerful, and optimistic soul who delighted in helping others, being a great ambassador, and standing up to oppose injustice. She loved traveling with us to competitions, and was very much part of the “Mother Goose Team.” (Jack LeGoff nicknamed me that because I was the only mother of young children on the USET, and of course I rode The Gray Goose.) Andy and I were inseparable until her early teenage years, survived that inevitable mother/daughter tough rite of passage, and had plans to work together when she graduated from Virginia Polytechnic Institute in Sports Therapy.

Andy started riding at the age of two, not because we encouraged her, but because she kept trying to climb up the legs of the horses we rode in Ireland. The stable owners let us use a pony named Appetite, and right away it was obvious that Andy knew exactly how to ride and communicate her wishes. Later that same year she was going over cross rails! 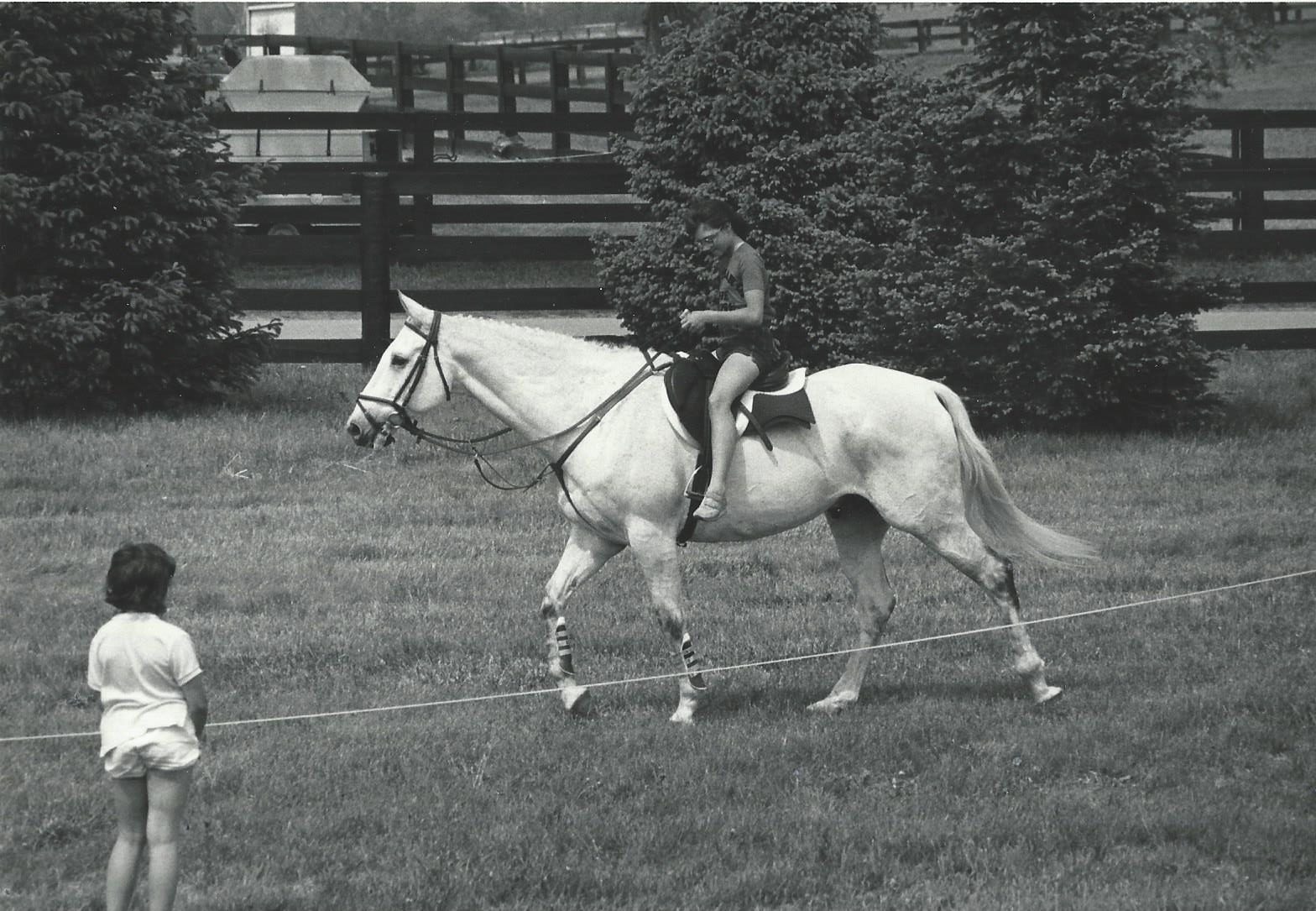 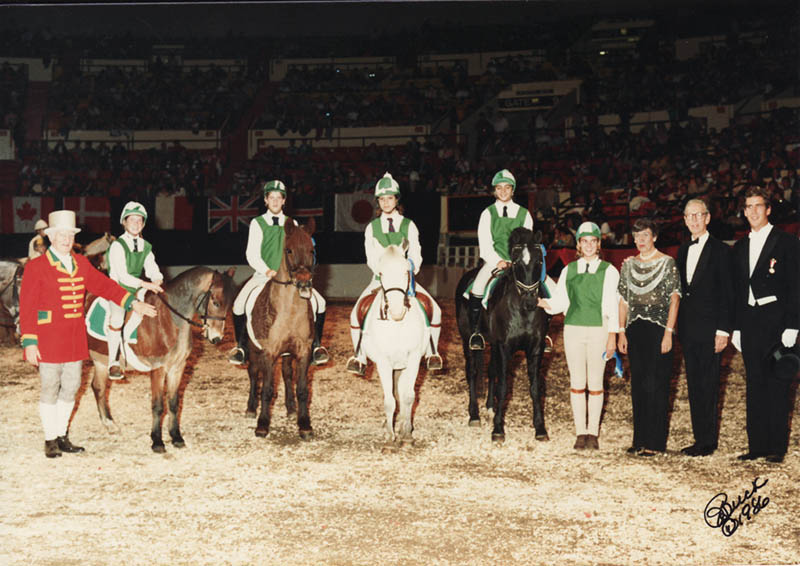 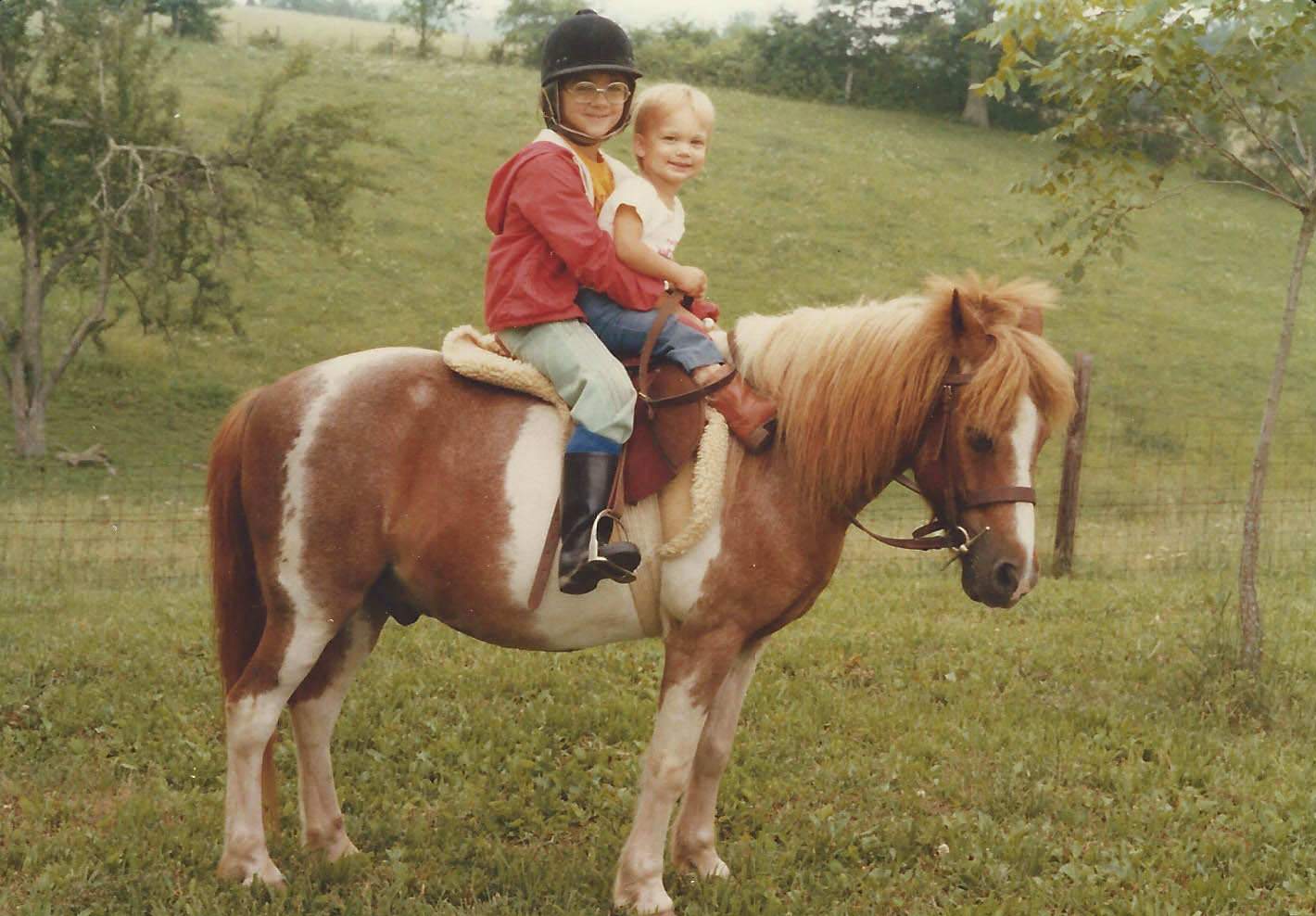 When we returned to the United States, she rode a succession of horses until we found Ebony, her equine soulmate. Famous in the 1960’s as a Medium Pony Hunter, with Andy as his new partner this black 13:2h imported Connemara once again excelled as a Pony Club mount, Eventing through Training Level and lower level Dressage, and they ended their career as part of the Pony Club Games team who won the Prince Philip Cup at Madison Square Garden. He was definitely a Master Teacher. They did everything together. When she outgrew him, Andy evented various horses, but none were like her Ebony.

As she grew in stature and talent, Andy began to teach with me. She was a wiz at coming up with challenging show jumping courses, and in my clinics would climb on the difficult horses to illustrate the training philosophy and techniques I was teaching. 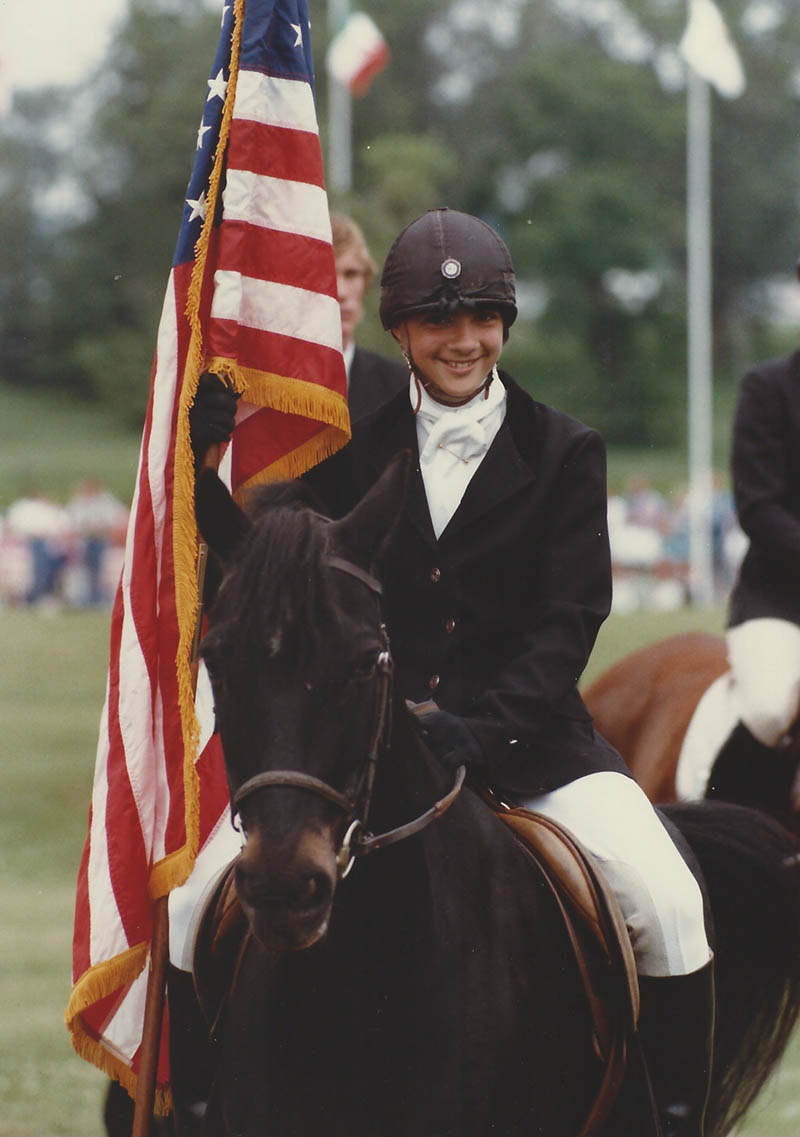 July 4, 1991: I woke up feeling like someone had kicked me in the stomach—that feeling of dread you get when you know something awful has happened. I could hardly breathe, and the feeling stayed with me the whole day until twilight when it suddenly disappeared. I was living and teaching in Lewisburg, West Virginia at the time. The whole thing was quite the mystery to me until the police tracked me down the next day in the middle of a lesson and I was informed by phone that Andy was missing.

I had to hand the phone to my dear friend, Annie Wood, for my world had just shattered around me. I, who had handled quite a few disasters with dignity, who was certain of my ability to hold it together no matter what, immediately collapsed to the ground. All strength fled me, for in that moment I KNEW that Andy was dead. My brain desperately hoped that I was wrong, but my heart and soul knew beyond doubt. I heard awful noises, but it was a few moments before I realized that they were the wails being wrenched from the depths of my being. I have never before or since felt agony like that.

Andy had been at Virginia Polytechnic Institute in Blacksburg, Virginia with other members of her Vaulting Team that summer. They were in training for the upcoming Pony Club National Festival being held in New Mexico, and were planning to leave on July fifth. To take a break on that hot Fourth of July, they went tubing together on the New River. Even though two thousand people were at the park that day, no one saw anything untoward. Her teammates said that she was going down the river with them, signaled that she was going onto shore, they acknowledged, and found their own landing spots. When they got to Andy’s exit point, they could not find her. They kept searching various places until at the end of the day they finally called the police.

For a week I sat by the search encampment at the park. I was back to being functional at this point, although still pretty much numb in every cell of my body. Friends came to sit with and support me, new friends joined them, and everyone searched and searched. The police brought in special dogs who confirmed the boys’ stories. The boys continued on to New Mexico and won their division with the music Andy had picked out. There is now a Pony Club perpetual vaulting trophy in Andy’s name.

I survived those days because Andy’s presence surrounded me with love, peace, and the knowing that she was where she wanted to be and was fine. A poem she wrote a few weeks before her death kept me sane. I also remembered a time when she was around three years old that she pointed to a lady in her early thirties and told me that she wouldn’t live to be that old. Of course I just blew it off at the time, but in hindsight realized that she was truly giving me a message. Though she never said anything like that again, her friends in college told me at her memorial service that she knew she would not live to be twenty-one, and had given them messages for me in the event something happened.

My faith, the support of my friends, the beauty that surrounded me in West Virginia, and a poem Andy wrote a few weeks before her abduction were all that kept me living when all I wanted was to join her in the afterlife. Although I continued to teach, I stopped all thoughts of competing. Andy reached out in visions and dreams to many—even to those who only knew her through the media reports of her being missing. She continues to have a deep impact on people to this day.

On November 1, All Saints Day and nearly four months after she disappeared, I received another phone call from the police. A hunter in West Virginia had tripped over human bones in the woods. A black bikini was discovered nearby…they thought it was Andy, which dental records confirmed. At last all of us who loved her so deeply were free to fully grieve. At one of her two memorial services, a young man who had only known her for a week in a summer course approached and handed her dad and I copies of a poem he had written and shared in the service. He captured Andy’s personality perfectly. 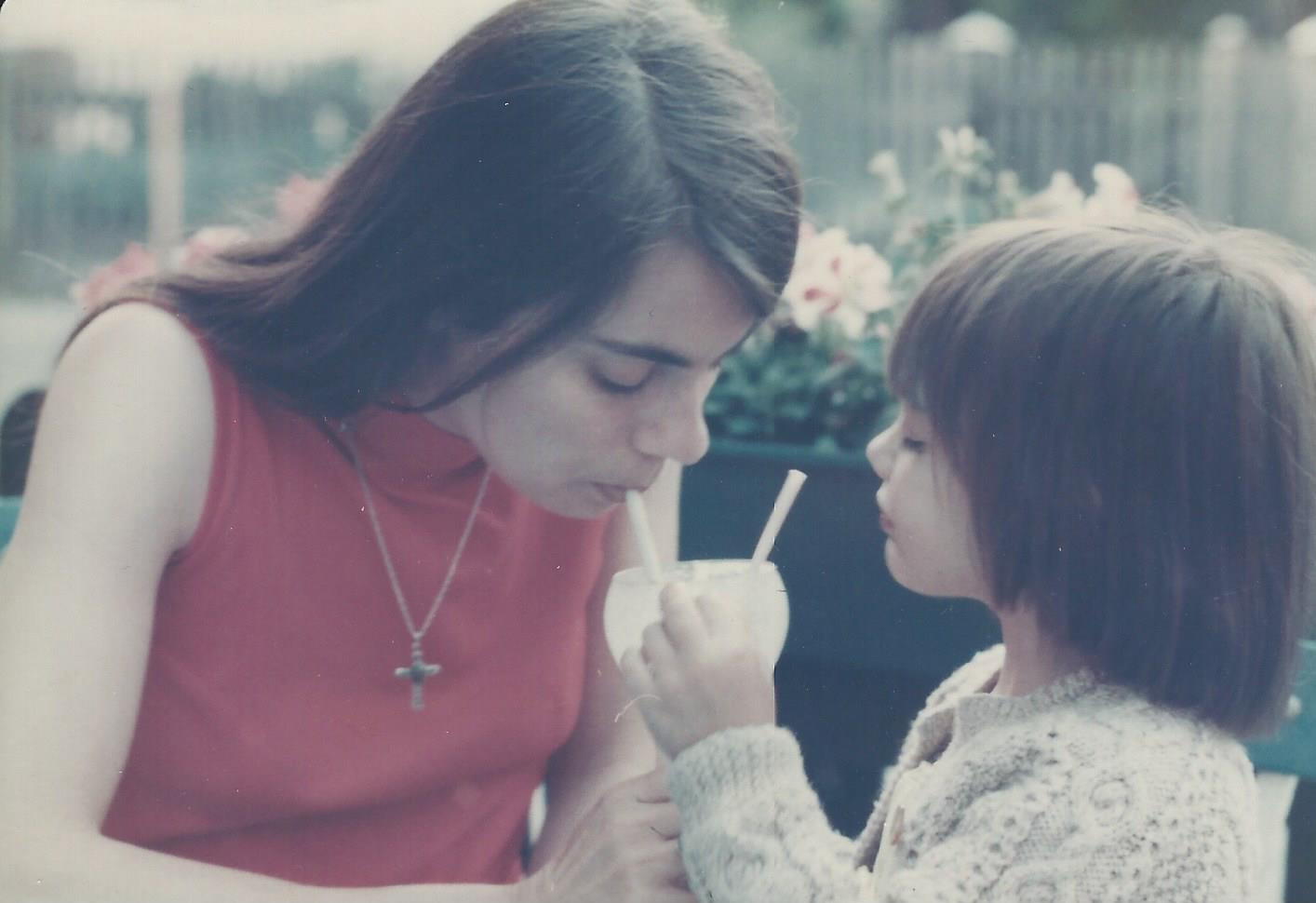 Andy disappeared in Virginia, but since her body was found across the state line in West Virginia, the FBI joined the search for the person or people responsible. Even so, there has been no definitive resolution. I have made peace with that, turning everything over to God, but the years that followed were full of challenges and it took three of those years for me to begin to truly come back to a life with feeling. It took many more long years before I was able to stop identifying myself as the mother of a murdered child, and it wasn’t until 2005 that I realized I needed to make a conscious decision to fully live again. In 2013, Gideon Goodheart in his amazing wisdom provided me with the catalyst to find forgiveness. Healing is a continuous ongoing process, and while traveling this path, I do my best to continue the legacy of Andy’s compassion, valor, and kindness to all.

Reach out through this form!