The roar of folks celebrating your success, an accolade from a respected instructor or friend, seeing your and your horse’s names/ photos in a magazine—any of these can swell our hearts and make us feel pride, happiness, perhaps fulfillment. Nothing, however, makes my heart and soul bloom like the magic of those shining moments of perfection that can pop up when I am all alone with my horse. Today was such a day. It was early evening when I drove onto the farm where I board. I was tired from a day of teaching and driving out of state, and all my body really wanted was to get home to dinner and a relaxing evening. But getting fit doesn’t happen for woman or horse when I sit in my comfy chair and Gideon stands in his stall. The beauty of this farm strikes me anew each and every time I enter the driveway. It was especially radiant on this perfect autumn evening, and there wasn’t another soul in sight. Gid was glad to see me, and opened his mouth eagerly when I showed him the bridle. I let him graze on the lush grass for a few minutes before work, allowing both of us the time to settle and take in the slanted golden light, vibrant greens of the meadows, and bright blue of the sky. Two distant gaily decorated hot air balloons offered more eye candy amongst the wispy clouds. Gid eyed the nearer one…dark dots in the sky don’t normally stay stationary, and he was asking me if he should be concerned. “It’s a vehicle for people to float through the sky…like a car, but floating like dandelion puffs”, I explained. “Why would they want to do that?” came his amazed thought. I told him that I’d been up in one a few times, and it was pretty cool. “Like the view birds see.” The feeling I got back clearly indicated that he filed that in his “people are crazy” folder. As perfect as this weather was, we entered the indoor arena with its spacious open windows in order to take advantage of the solid walls and good footing. My plan was to do some classical In Hand work. No real collection…just working toward better transitions in alignment and lightness. After his warmup, we progressed through other exercises, and with a series of rein back to trot transitions, he spontaneously and effortlessly lifted into a very engaged collected trot. It was elevated, light, connected, fluffy. The feel of all that self-contained power and grace flooded my system with excitement, and I reached for the calm necessary to maintain my own poise. I added some rhythmic clucking and he became even more up, more powerful, and offered some true steps of Passage. Every fiber of my being was thrilled to the core, especially as this has been something that had eluded us until now. Wow! A few steps later I throttled down the part of me that wanted to keep going and asked for the halt…. Which was instantaneous, square, and I could feel that he was ready to immediately go again. Quietly and with great respect for what just happened, I put down the reins, put my arms around his neck, and shared my great joy. The look on his face when he took the proffered horse cookie was, I think, best termed “smug”. He was completely delighted with himself. After a fierce inner debate about whether to stop our session or continue, I dared asking for it again, and he delivered! In fact, he did the few steps I requested twice more in each direction. More than I would normally do in the beginning of something new, but he was so very clearly enjoying himself I just got swept along in the sheer fun we were having. The pride and jubilation in his eyes as we halted square for the last time reflected what was shining in my own. We exited the arena into a world that felt sanctified. The large farm was so quiet, the light a golden benediction, and Gideon and I were joined in a peace-filled inner soaring that more than topped any hot air balloon ride. Though I had a long drive home ahead of me, this was a moment to be treasured and savored. I lowered the reins to give him permission to graze, and we drifted along where he wished. We wrapped ourselves in the happiness of simply being in each other’s company on this magical evening. More wonder came with the changing sky. A three-quarter moon rose in vastness, and the wispy mare’s tail clouds became tongues of fire from the lowering sun. In another quadrant of the sky, an already darkened cloud flew south in the perfect shape of a huge bird. Gid lifted his head. I gazed into his dark golden eyes and drank in the glory contained there. Yeah…public acknowledgment is nice, but nothing beats a quiet evening sharing hearts with my horse. 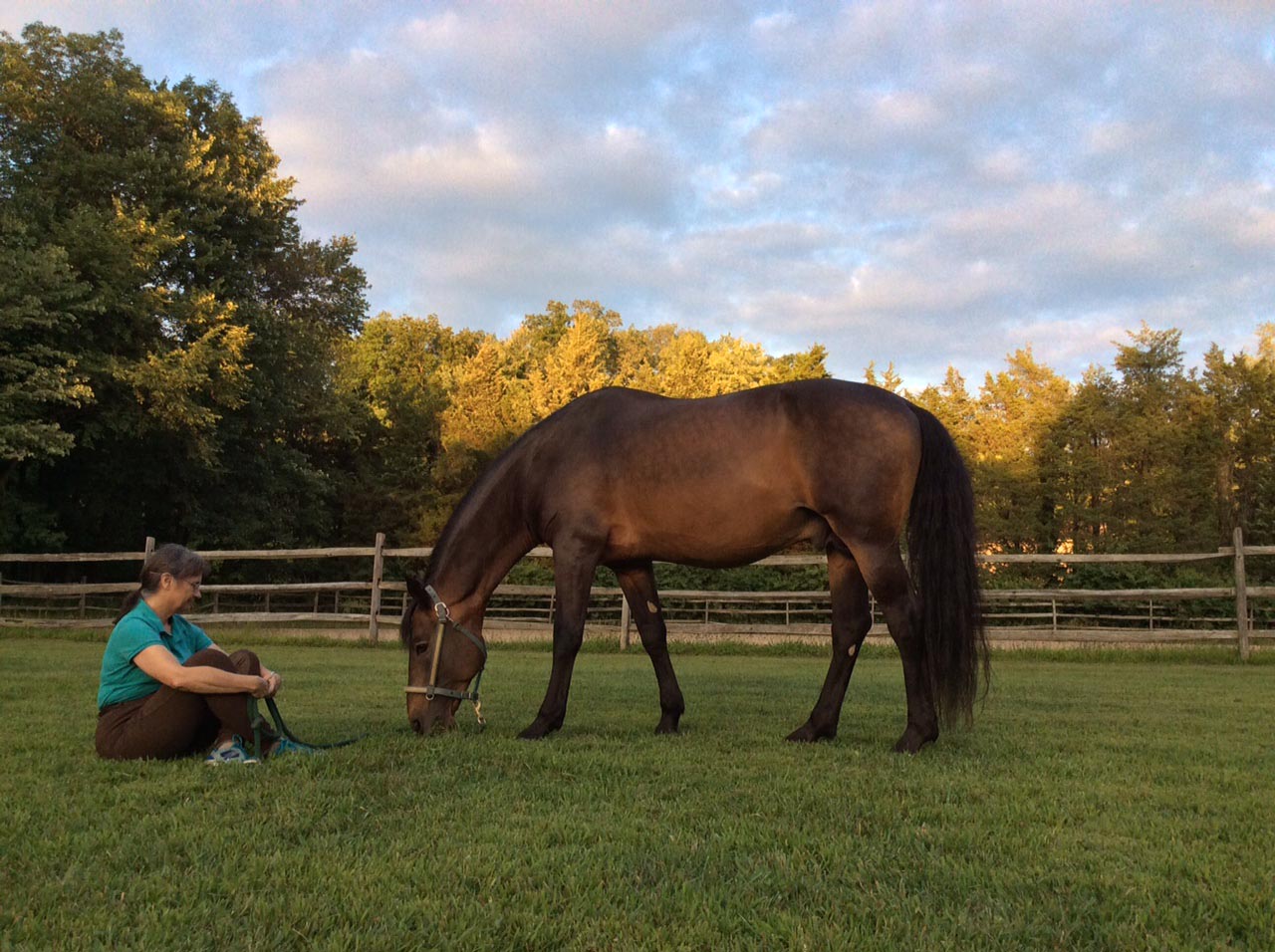