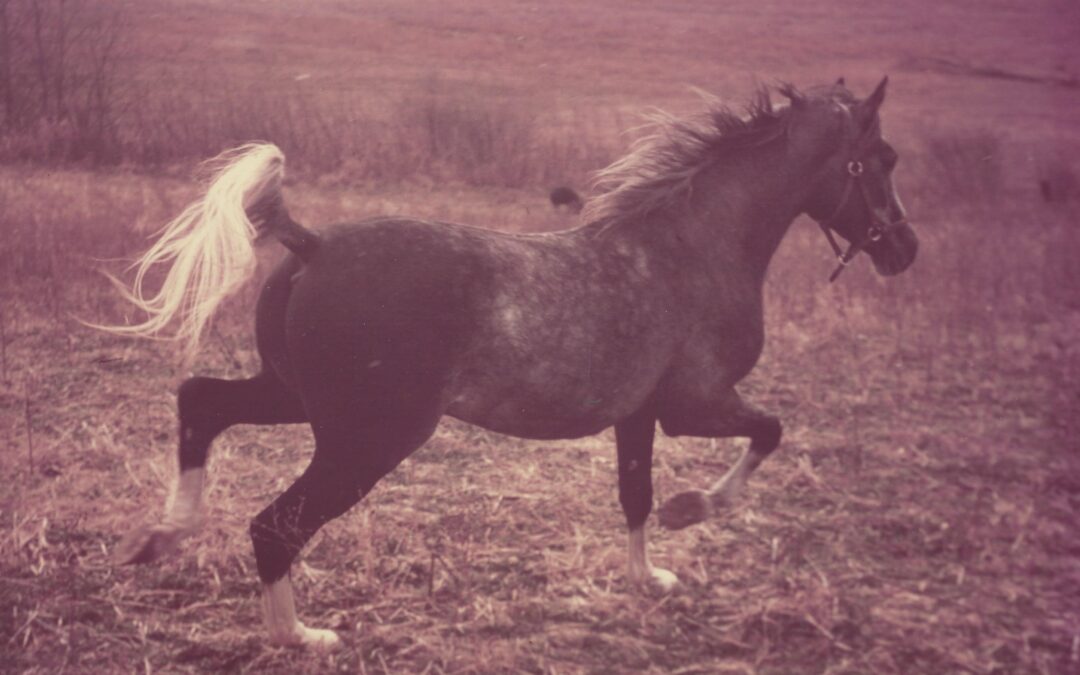 His registered name was Al Marah Silver Deer, which fitted him perfectly. He was the essence of beauty and grace in all their aspects. His color and form filled my heart with joy, as did his kind temperament and his willing heart. “Silver” or “Deer” didn’t suit him, however, but the name of one of my favorite heroes from Lord of the Rings did. He was filled with willingness and honor. I had long dreamed of owning a purebred Arab, and through the generosity of Bazy Tankersley trusting me to buy him on time payments, now my dreams had come true.

When he turned four, I started him under saddle, and we flowed together right from the beginning. As his education progressed, I decided one day to take him out to explore the exciting and gorgeous cliff trail I’d heard about that ran above the New River near where we boarded in Virginia. There was no one to go with us, but I normally ride alone…I never thought twice about it.

The day was spectacular. Bright blue sky with lovely white clouds, not too hot or buggy. The view down the steep river side was amazing, and Aragorn and I were “groovin’” as we used to say back in the early 70’s. The trail began to narrow, but I didn’t worry since I’d been told it was a loop trail, and Aragorn was surefooted. As it continued to narrow, however, my inner voice mentioned something about this being a good place to turn around. But being twenty three years old, blissfully ignorant and way over-confident, I ignored it. As is always the case, that was a BIG mistake.

Suddenly, as we approached what would have been a bend, the trail just disappeared into empty space. Obviously there had been a total washout. I stopped Aragorn to assess the situation. Looking all around, I entered that hyper focused state of awareness as understanding dawned. To our right was a sheer rock wall going straight up hundreds of feet. To our left was a very steep drop-off to the river, which was a LONG way down. Luckily the slope did have trees on it…my mind offered a picture of us draped around a trunk…better than falling all the way to the river, but not good. Ahead was nothing, and the trail we were on was just barely wider than our combined width. I couldn’t risk backing him up, because he hadn’t yet learned to back completely straight, and if he made a sidestep we would be toast. There wasn’t even enough room for me to dismount. I had gotten us into a life or death situation.

We didn’t have cell phones back then…no one was coming to rescue us. Aragorn waited patiently. I wasn’t panicked, but I knew we were in deep trouble and needed help. I prayed, asking for intervention and inspiration in equal parts, and the answer that came back to me was to trust Aragorn. After all, being an Arab, he had centuries of smart warhorse genes to draw upon.

I lowered the reins down on his neck, put a hand on his shoulder, and told him I was terribly sorry to have gotten us here, but here was where we were, and it was up to him to get us out of trouble. The only thing I could imagine happening to get us out of the situation was if he stood on his back feet, faced the wall on our right, and walked us across it to face the other direction. There was no way I could tell him to do that. Earlier in my life, a ¾ Arab had gotten me out of a mess, however, and I had total faith in Aragorn to do the same.

I deepened my seat, reached forward to take a generous double handful of mane, and waited quietly. I could feel him thinking…and then he rocked back on his hocks, lifted his front end, and to my immense gratitude and amazement did exactly what I had imagined! He put his front hooves on the vertical wall, carefully rotated in place on his hind feet, walked sideways with his front feet on the rockface, and got us facing the other direction!

Needless to say, I was filled with enormous relief and gratitude—beyond words to express. What an amazing horse! After I made sure he knew my feelings, we carefully continued back to where the trail was wider, and then I dismounted and led him the rest of the way home…just in case he had strained anything in his astounding rescue move. He was full of the peace that comes from knowing you’ve done a great job, and I relived those few moments over and over as I thanked God, Aragorn, and all our guardian angels every step of the way back to the barn.

The next day Aragorn was fine. Like his namesake, he was a true hero and a wonderful teacher. When I became pregnant with our daughter, Andy, Aragorn knew right away and began carrying me like precious cargo and being oh so very careful around me on the ground. I rode him till there was no longer room between my swelling belly and the pommel of the saddle.

And after Andy was born, he was the first horse into whose eyes she looked.